Uncovered with Stamus Security Platform: Danger in the Datacenter 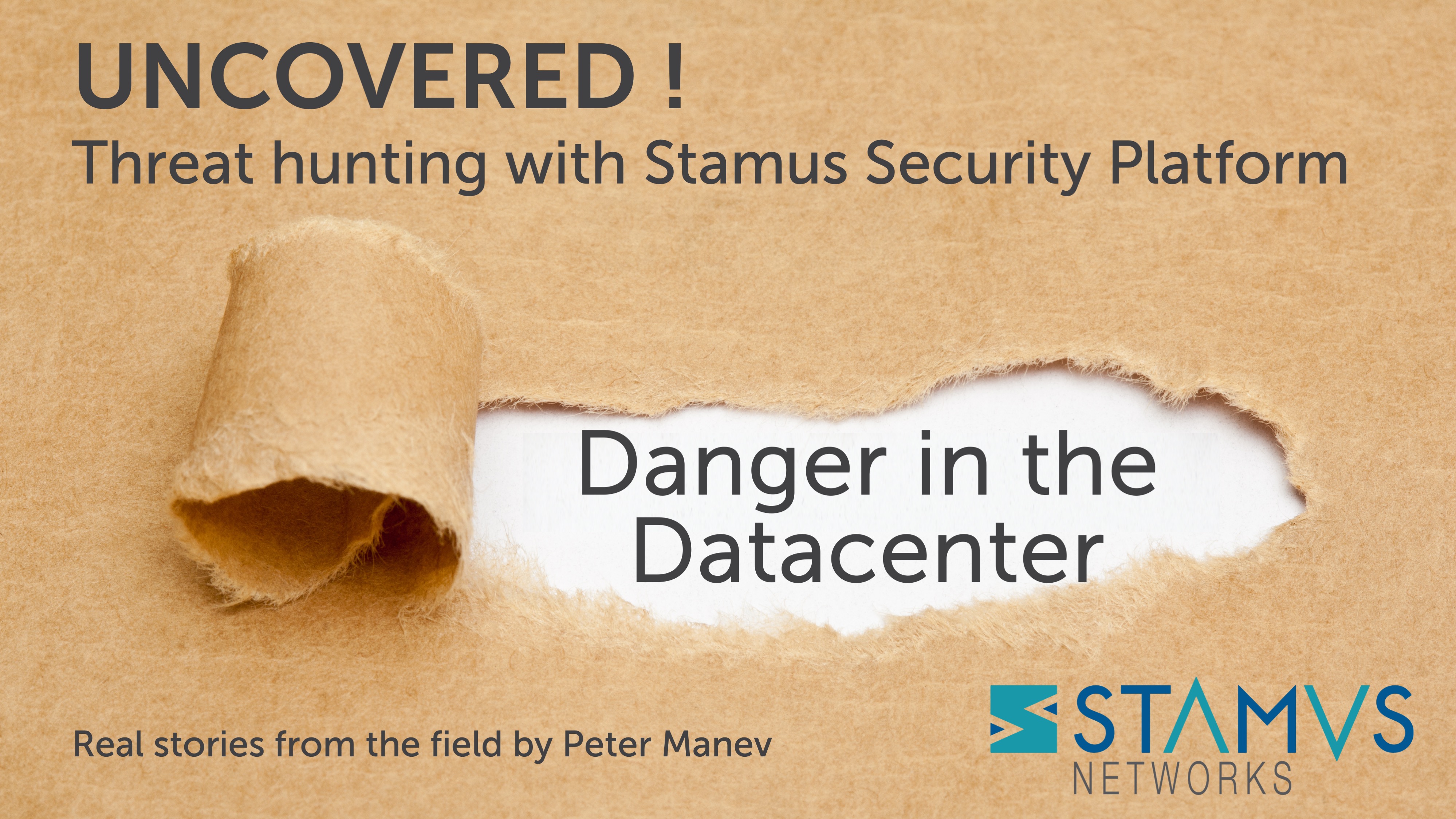 And if bad things are found, they must quickly assess the situation, asking:

As part of a recent proof-of-concept, we were asked by the datacenter operators of a friendly hosting service provider, to answer these questions. They were interested to understand the cyber threat landscape in their environment and if they needed to address anything serious and imminent.

In this article we explain what we found.

NDR required where EDR is not possible

Because the nature of the hosting services in this environment does not give the hosting provider access to the actual endpoints, deploying an EDR solution is not possible. So a network monitoring solution is the only practical way to gain insights into the security posture.

So, with no control over endpoints, server installations and hosting setups and plenty of encrypted traffic transferring among various public sector and commercial organizations present, we were presented with an ideal scenario for our network detection and response (NDR) solution.

Additionally, because an NDR is a passive network monitoring system, it is completely non-intrusive to the business. That is, it does not need to be installed on every single host but instead on one or more congestion points in the network - simply sniffing traffic off a TAP or SPAN/mirror port.

For this proof of concept, our Stamus Network Probes were positioned outside the firewall, so we had an unfiltered view of the inbound and outbound network activity. The traffic included a mixture of business critical applications, web hosting setups, databases, email hosting, consumer-facing applications, and others.

The setup we deployed was fairly typical.

We installed a Stamus Network Probe, and the customer directed a subset of their network traffic using a 10 Gbps mirror port to the probe. Stamus Security Platform was installed on the customer’s hardware and the entire system was deployed with the full Stamus Network Detection and Response (NDR) license package.

We configured the system with the Stamus threat intelligence for high confidence events (Declarations of Compromise™), self-learning anomaly detection (Stamus Sightings™) as well as a third party ruleset (ETPro) and IP/Domain reputation lists.

After setting up the Stamus Solution we were faced with two possible approaches:

Due to our limited access and resource constraints (not unlike a typical security team), we chose to rely entirely on automation for the one week period.

After one week: Holy cow!

Over the course of one week, we were able to get a pretty good idea of the big picture situation, and collect a treasure trove of supporting forensic network log evidence. 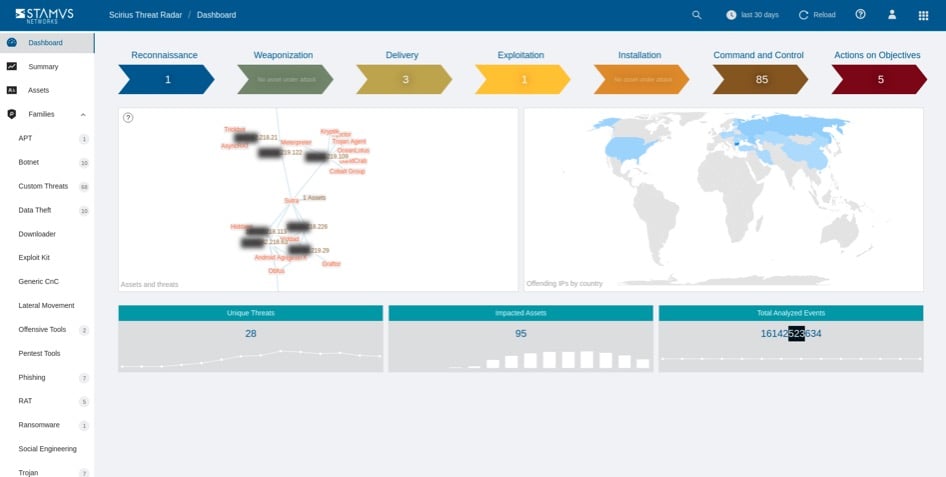 During this one week, we uncovered activities in nearly all of the major threat families tracked by Stamus Security Platform, including:

Naturally, the APTs presented the most worrying of all these for the hosting provider because many of their customers are high-profile business and government agencies.

Stamus Security Platform is particularly good at detecting malware activity on the network and ascertaining which systems are the offenders and which assets are being targeted. During this one week, we uncovered activities from more than two dozen malware types, including:

After identifying who was friend and who was foe, naturally a bit more information was needed to determine how things evolved with each specific threat/threat actor. For example, is there a connection between different groups? In what stage are each of the attacks associated with the assets?

In the screenshot below we see an example of the relationship of the threat activities among different affected assets.

So, what happened and when?

One of the more powerful investigative features of Stamus Security Platform is its ability to show a timeline of the affected assets and the progression of an an attack throughout the stages of the cyber kill chain.

While it’s always a little unnerving, I never get tired of discovering the various ways that the different malware and threat actors work together and the communications channels they use. 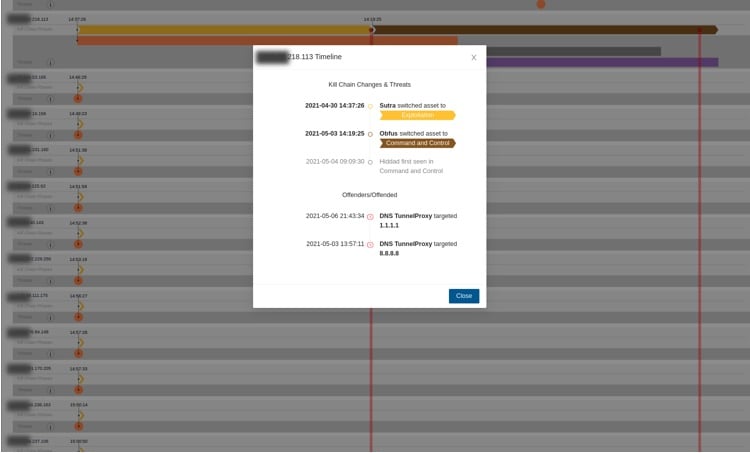 Unfortunately, we cannot publicly share any of the specific details, but I must proudly acknowledge that even Docker, Docker swarm and Kubernetes installations and keystrokes are not off limits to the Stamus Security Platform automated detection. And in this case the system was able to provide impressive forensic log evidence in both volume and quality.

Here are just a few examples of what Stamus NDR observed during this week: 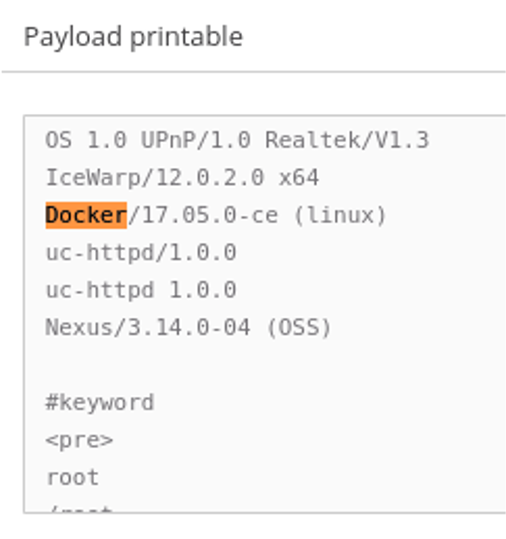 This specific deployment was not typical for us, as it was very different from our usual big corporate organization setups. As such, it brought with it a number of challenges. As I mentioned at the beginning, we had no idea who was friend or foe, no idea of what endpoints we might encounter and no idea of what to expect in terms of the potential threat landscape.

Additionally, the blue team on site was faced with many constraints, including time, resources, costs, and privacy. And because the environment did not lend itself to endpoint solutions, there are limited possibilities in terms of monitoring solutions they could deploy.

In just one short week, the Stamus Networks team was able to help out the blue team at one of our partner data centers. We are proud to have been able to uncover several serious and imminent threats, and identify a few nefarious threat actors associated with an APT actor group and support it all with detailed timeline of events and with substantial evidence. 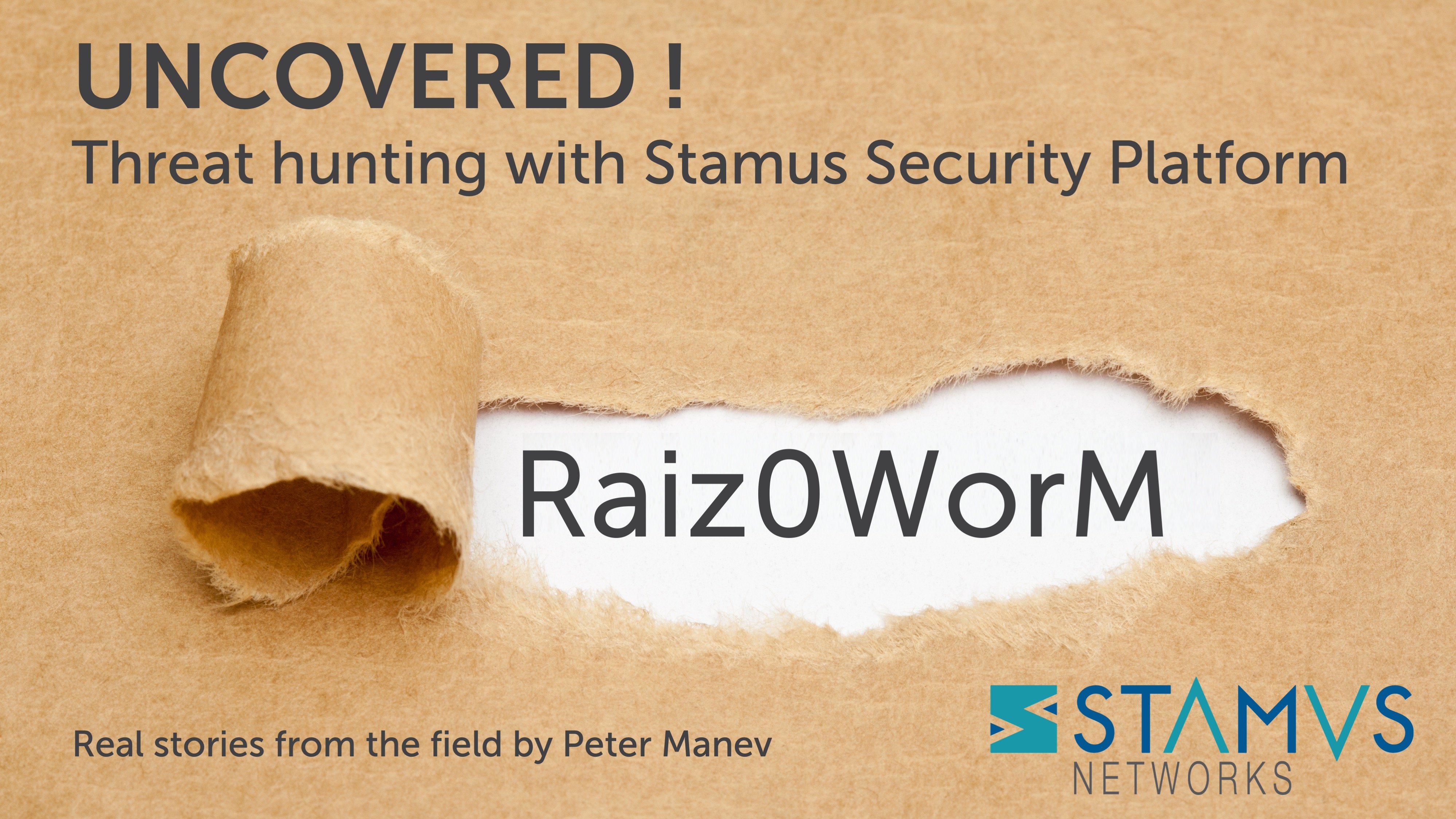 Existing systems that aggregate network security alerts and metadata do not properly detect and...